CONCEPT
An architectural web of threads subtends a null space. It hangs abstract and undefined, a set of thin positive elements segmenting the dark negative space between. Dynamic imaginary forms are articulated into the physical volume by the material of this thread, and the semi-material of the light. The visual gravity of the filaments occupying the space between.

A 2D canvas is reduced from a surface piece into a line segment, but then constructed into another dimension, a volume. Light creates contrast and order on the lines to articulate digital matter. Digital forms inhabit the interconnected boundaries of space, becoming incarnate as visual mass.

The artists reference Picasso’s light painting, and Reticuláreas of Gego who’s work offers a contemplation of the material and immaterial, time and space, origin and encounter and art and technology.

By Kimchi and Chips 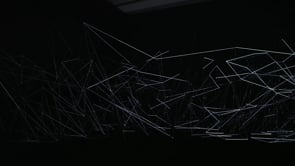